The following is an account of some practices that occurred with the Port Bruce and Gravel Road Co. and its successor the Port Bruce Harbour and Dredging Co.

I believe the author was Capt. Thomas Thompson, of Port Bruce who was Harbour Master at one time. He was also Postmaster at Port Bruce from 1868 to 1905. This was probably written in the 1890’s. These papers were obtained by neighbouring Port Bruce resident Levi Young, possibly at his request at a time when he was making notes for a history of Port Bruce, or for the 1877 Historical Atlas. These papers were part of the estate of his daughter, Edna Young Johnson. 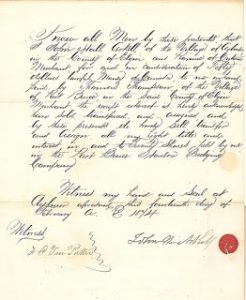 In 52 [1852] the Port Bruce and Gravel Road Co. [was] formed. Directors at that time [were] Amasa Lewis  Lindley Moore , [Charles]Tozer , William Jones  and Mr. [Ganson?]. In 56 [1856] the thing began to play out. [The Co.] had to pay for the loss of a cargo of coal. The Co. stood a lawsuit in London and lost it then went to Toronto and the Co. lost again. Between paying for the coal and cost of court the Co. was bankrupt. They then borrowed I think seven thousand dollars from the township and gave a mortgage on the road and harbour. But, the Co. could pay neither premiums nor interest so the township had to close the mortgage and run the thing themselves[1863]. They appointed me Harbour Master. I don’t know who looked after the road.

The township ran the thing about 3 years. They then put the road and harbour up for sale by tender. Lindley Moore, John Arkell  and Mr.___ and myself got the Sheriff [Colin Munro ] to buy the thing but it was not to be the Port Bruce Harbour Co., but the Port Bruce Harbour and Dredging Co. By doing this we [were] not responsible for any loss of  [     ?] or cargo. We only charged for dockage. The sheriff appointed me to look after the harbour and collect the tolls and I had also to look after the road as far as Aylmer. John Arkell looks after the north part. Mr. Moore collected the tolls of the 3 toll gates. Once a month we met at Aylmer. Mr. Moore and I then gave in what [was] collected. The sheriff always brought Mr. Scarff.;  with him. Mr. Scarff looked after the books of Harbour and Road.

We [had] a good deal of expense the first year. We built a new bridge at the port costing about $1400. [We] got the Port Stanley dredge to dredge out the harbour costing between $400 and $500. [We] also bought a large team and outfit costing $400. [The] next year we got the Port Burwell dredge costing about $400. We ran the thing I think about four years when the railroad – it threw us in the [shuck?]. We then had to sell the road back to the township. We wanted them to take the Harbour off our hands but they would not. Mr. David Davis  [was] Reeve of the township at the time. We sold it back and the Reeve thought we should give the township a road through our grounds to the beach. Mr. Arkell then moved and I said it that they should have the road and the township should exempt them from taxes.

After the sale of the road we never met and what little I collected I spent it on the dock.  The sheriff never bothered about the matter till he learned I was about taking stone out of the [ bog?] and was going to sell them. He then came down and said it would not do and forbid me touching them. The sheriff then said, “I understand you and Mr. Davis had a little altercation about gravel – that you turned back his teams empty.” I said I did but told the teams to go on Mr. Moore’s beach if he was willing or they could have what gravel they wanted of the harbour ground for $6.00 a year but [they] must not take any gravel nearer than one rod from the pier. We never ourselves never took gravel nearer than 4 or 5 rods from the pier.

Mr. Moore let us have the gravel of his part for the use of the road  when there was no gravel to be got off the beach. I would send the team to Mr Arkell and he would put it to work hauling pit gravel whenever there was a good lot of gravel on the beach. I would get [an] extra wagon and a man and haul out in pile for future use. The sheriff, Mr. Moore and myself was on the beach when talking about the dispute with Davis teamsters,  Mr. Moore pointed out about how far west the harbour grounds went. In the conversation the sheriff turned to me and said, “Thompson , the ground on the other side of the creek will never be any good to us.  Suppose we give that back to Mr. Moore and you make what you can out of the gravel.” Mr. Moore was well satisfied to do so but the sheriff said I had better speak to Mr.___. I did so and he said it was all right. He wanted no more to do with the thing.

Some time after this Mr. Moore asked me if I thought the sheriff meant for me to have the use of all the beach or only the harbour ground. I told him that the sheriff could only [have] meant the gravel on the harbour ground. Now don’t you think it very strange that all the money spent and received that a scratch of a pen can’t be found to show any of the [trac??] Some would say there must of been some crooked work in the thing but I won’t say that, but [I] believe that Scarff had full control of the books and was kept seperate from the Sheriff and if not destroyed will be found amongst Scarff’s effects.

The reason we did not like gravel taking away close to the pier the first part of the year is built on piles and allowed the sand to sift through into the harbour and by keeping a good lot of gravel near [the] pier prevented a good deal of sand washing through. After the beach got out beyond the piles and on to the crib work the sand  [?   ] not then through.

This is about all I can remember about the concern. My old head is not as clear as it was 20 years ago or I might of put the thing in a little better order.

The 1877 Illustrated Atlas of Elgin County,  states on page VIII;

“In 1855 a government agent  visited Bruce and the result was a gratuity of $6,000 for the improvement of the harbour. In the same year the Aylmer and Port Bruce Gravel road was completed. It was built by a company several of whom are living in Aylmer at present and although they made no shekels by building it, the enterprise was a great help to the township and marked an era in its prosperity. The “Gravel” is a good road yet and toll gates are abolished. The company mortagaged it to the township, and the corporation, about the year 1860 took it in paymnent of the debt — sold it with the harbor in 1869 to Sheriff Munro and others–bought it back and removed the gates in 1874.”

In the business directory of the same publication are: