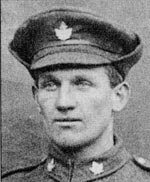 Born and educated in Wallacetown, Sifton joined the 18th Battalion, Canadian Expeditionary Force in October 1914. During the Canadian attack on Vimy Ridge on April 9, 1917, his company was held up by the fire of a German machine gun. Lance-Sergeant Sifton charged it single handled, killed the crew and held the position against enemy counter attack until his comrades arrived. In carrying out his gallant act he was killed, but his conspicuous valour undoubtedly saved many lives and contributed largely to the success of the operation. The British Empire’s highest award for military valour, the Victoria Cross, was awarded posthumously to Ellis Sifton.

Erected by the Ontario Archaeological and Historic Sites Board

On 9 April 1917 at Neuville-St.-Vaast, France,[1] during an attack on enemy trenches, Lance-Sergeant Sifton’s company was held up by machine-gun fire.[1] During an attack on Vimy Ridge, “C” Company of the 18th Battalion was held up during its advance by German machine gunners who had survived the artillery barrage by taking refuge in concrete shelters.[1] As the Canadians moved forward, the enemy’s machine guns swept the battlefield, causing heavy casualties. Sifton saw the enemy’s machine gun nest first. He jumped up, rushed forward and leapt into the trench. He then charged into the enemy gun crew and knocked the gun over before turning on the gunners with his bayonet, killing each man.[1] More Canadians hurried forward, but not before a small German party moved down the trench towards Sifton. He used his bayonet and his rifle as a club to fight them off until help arrived. Despite these efforts, Sifton was killed during the fighting.[1]