(This stone is 50 yards back from the road along the fence line in a lilac bush thicket on private property.
Please obtain permission from property owner (Max Ferguson) to trespass.

Revised and formatted for the Internet 12 Sep 2008 by Bruce C. Johnson Jr.

Copyright by the Ontario Genealogical Society, Elgin County Branch 1999
All rights reserved. No part of this publication may be reproduced, stored in a retrieval system, or transmitted in any form, or by any means – electronic, mechanical, photocopying, microform reproduction, recording, or otherwise – without prior permission of the publisher.

All that remains of this burying ground are two stones bearing the surname Smith. An article by Lloyd Babcock, which appeared in the Aylmer Express, April 18, 1946, gives information about the cemetery, and the two markers that were in existence at that time.

Lying along the line fence between my farm and Ross Ferguson, on a little knoll about 10 rods inland from the road on the 8th concession of South Dorchester is a small pioneer cemetery. Years ago it was called the “Smith Burying Ground”. Partially hidden among a clump of lilac bushes until a year ago when we cut them down to rebuild the line fence, there still remains two tombstones with the engraving still legible.

I have often been asked by passers-by to whom those graves belonged, and thought that it might prove of interest to some of the readers of the “Express”, who in passing by might have noticed them.

I have been told by some of the old-timers who once lived in the neighbourhood when I was a boy that there were about 50 buried there. Most of them I have been told, were children. Mrs. Margaret Smith, of Springfield, who was 87 years old October 26th, 1945, told me that her twin brother, who died in infancy, was one who was buried there.

I can remember when I was a small boy, there used to be a pine board fence around the little plot. It ran down near the little creek at the base of the knoll. There were several small gravestones inside the enclosure. These have long ago disappeared, only the two remain. 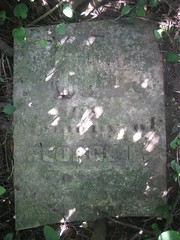 He was killed while engaged in cutting a pine tree on his father’s lot and died almost instantly.

“Behold and look as you pass by, as you are now, so once was I. As I am now, soon shall you be. Prepare for death and follow me.”

Her epitaph is as follows:

“A faithful friend, a companion dear, a tender mother lieth here. Tho’ great the loss we all sustain, but hope to meet in Heaven again.”

Doctor Oliver Smith with his wife and family, came from Walsingham township to South Dorchester in 1855. Twas then they purchased lot 7, con 8, South Dorchester from the Crown. It consisted of 200 acres. There were two or three girls in his family, of which I have no recollection. But I remember three of his sons, brothers of the deceased George. They were Thomas J. Smith, Charles Wesley Smith, who moved to Michigan. Lastly there was Hyma Eugene Smith, who died in Aylmer a number of years ago.

Dr. Smith died in the autumn of 1882, and was buried in Springfield cemetery. Many marked changes have taken place since then. Over 50 acres now belongs to James Ivan McIntyre of Harrietsville. Another 50 belongs to Wallace Fletcher, while the south 100 acre lot now belongs to Ross Ferguson.