Revised and formatted for the Internet and Mobile Devices 24 August 2017 by Bruce C. Johnson Jr.

All rights reserved. No part of this publication may be reproduced, stored in a retrieval system, or transmitted in any form, or by any means – electronic, mechanical, photocopying, microform reproduction, recording, or otherwise – without prior permission of the publisher.

The transcriptions printed here were originally compiled by the West Elgin Genealogical and Historical Society(WEGHS). Copies are available for sale from WEGHS. WEGHS is not liable for any damages due to errors or omissions in these transcripts.

Use your browser’s “Find in Page” command in the menu to locate your surname in the file below. 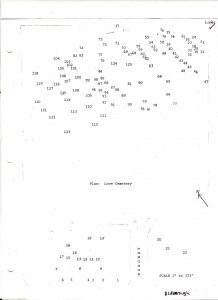 28. Medium white limestone, broken
In memory of / Nancy / wife of / Donald G. GUNN / died Jan. 5, 1866 / in her 40th year / Friends or physicians could not save / this mortal body from the grave / Nor can the grave confine it here / when Christ our Saviour shall appear /