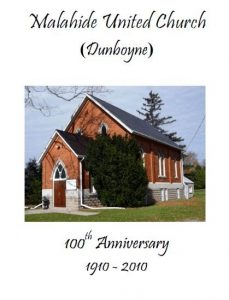 As we look back on the history of Dunboyne United Church and the former Malahide Pastoral Charge, each of us will have our own special memories. During its 100-year history, this church has served as a centre of religious and community gathering to many generations of Malahide residents. We cannot count the number of people whose lives it has touched, whether through Sunday morning worship, Sunday school, Vacation Bible School, Young Peoples’, the United Church Women’s activities or community social events.

What excitement there must have been in 1909 when plans were being made to build a new church, and again in 1910 when the cornerstone laying and grand opening ceremonies were held. What a testament to the faith of the people of Dunboyne: to have a vision of the future, knowing their actions would provide a place for their descendants to worship God for many generations to come!

And then came the challenges: The Great Depression of the 1930s, putting financial strain on many families to find the means to support the pastoral charge; then the post-war shift in population, bringing about a decline in membership in all the Malahide churches as many of the founding families moved away from the area. Unable to sustain a congregation of their own, the three other points on the Malahide Charge – Copenhagen, Mount Salem and Luton – closed their doors and formed one congregation with Dunboyne in 1957.

Following the amalgamation, the Dunboyne church experienced one of the most invigorating periods in its history. For the next several years the church was nearly full at Sunday morning services, there was a senior and junior choir, the basement was filled to capacity with Sunday school classes……..and what will likely be talked about most during this celebration will be memories of the Young People’s group that thrived during the late 1950s and 1960s.

Then in 1964 a further amalgamation took place, with the congregations at Summers Corners and Richmond joining with Dunboyne to form a pastoral charge. With great hope for the future, again these faithful members of our church carried out the work necessary to sustain a full-time minister and keep all the programs of the church operating.

The next three decades saw a marked decline in attendance, as one by one the pillars of our congregation were promoted to their new home in Glory. While it saddens us to witness the dwindling numbers in the pews, we are not ready to write the final chapter on our church just yet, and we go forward with hope.

It is with a great sense of pride that I have undertaken to compile this history of our church, knowing that the task of capturing the spirit of our forbears to preserve for future generations is no simple assignment. My own childhood memories of attending Sunday School and church here remain vivid, supported by the many visits I made in the intervening years after I moved away. Having over the past couple of years renewed my association with this congregation, it is truly a place that I can call “home”.

In compiling this history, I have relied heavily on the church records available, as well as notes from interviews in the 1970s with my grandfather, Leon Simpson, who was Clerk of Session of the pastoral charge for nearly forty years. Another valuable source was a booklet, “Church History, Elgin Presbytery, London Conference, The United Church of Canada, 1967″, the introduction of which reads: “This book, prepared by a special committee on the occasion of Canada’s Centennial, has been compiled so that some permanent record, relating to the life and work of some of the men and women who have served their churches, so faithfully throughout the years, may be preserved.” Many of the capsule histories of the Malahide churches contained therein were compiled by the late Marie Briggs.

I am also indebted to the Elgin County Archives for permission to reproduce several photographs which were in their collection. My thanks also goes to members and former members of the congregation who supplied information. Special recognition is due Linda (VanPatter) Charlton, who compiled the chapter on the Young People’s Group. Because the congregation of Malahide United Church at Dunboyne since 1957 was comprised of members from all other former points in the township, this history will contain chapters on the churches at Copenhagen, Luton, Mount Salem, Grovesend, Jaffa, Fairview, Summers Corners and Port Bruce. A section has also been written about the Dunboyne Union Church, which was the place of worship prior to the erection of this building in 1910.

A church service to celebrate the 100th anniversary of Malahide United Church was planned for Sunday, September 19, 2010. We were delighted to have as guest speaker for the service, Rev. David VanPatter, of London, a former member of the congregation. Music for the service was provided by the Whistle Stop Barbershop Quartet of St. Thomas, and guest organist was Jim McCallum.

Following the service, an anniversary cake was cut, followed by a light lunch served in the basement. The afternoon was spent reminiscing with old friends and looking at a collection of pictures. At 4:30 the crowd moved over the Luton Community Hall for a buffet dinner of roast turkey and beef catered by Belmont Town Caterers.