Gravestone Inscriptions
and
Burials without Monuments

Copyright by the Ontario Genealogical Society, Elgin County Branch 1982 – 2002 All rights reserved. No part of this publication may be reproduced, stored in a retrieval system, or transmitted in any form, or by any means – electronic, mechanical, photocopying, microform reproduction, recording, or otherwise – without prior permission of the publisher.

Trinity Cemetery is located in a community known as Glencolin. Although not much remains today to indicate a “settlement” once existed, the road on which the cemetery and church are located has been named Glencolin Line. Little information is known about the history of the cemetery, but the following account tells a little of the church history and the families who lived in the area.

A deed dated Oct. 16, 1865 was registered between John & Lydia Bowen and the Trustees of the Canadian Wesleyan New Connection Chapel, Malahide, for ½ acre in the north east part of lot 26, in the Gore between con.7 and 8, for the site of a chapel and burying ground. The original church was frame and was destroyed by fire circa 1900. The 1877 Elgin Co. Historical Atlas shows a church building on this lot, which is on the south side of what is now Glencolin Line. The cemetery is shown across the road. The present brick structure was erected due to the efforts of the forty or more families supporting the church. The cornerstone was laid on Sept. 24, 1900 and the first service was held Jan. 1, 1901. At this time the church was part of the Springfield circuit (with St. John’s Methodist) and probably was affiliated with that congregation prior to this date. The church was closed in 1964. The building and one-half acre property were sold on April 2, 1964 to the Old Colony Mennonite congregation.

In 1947 on the occasion of the anniversary service, Rev. J. T. White wrote an article in the Aylmer Express, April 27, 1947, which gives some history of the church and lists the forty families with a brief account of each.
TRINITY CHURCH, MALAHIDE, TO KEEP ITS ANNIVERSARY NEXT SUNDAY AFTERNOON

Trinity United Church, located on the 8th concession of Malahide, will celebrate an anniversary service on Sunday, April 27, at 3 p.m., when a distinguished clerk, Major the Rev. D. A. Cowan, an ex-padre in the Canadian forces, will be the guest speaker.

The present red brick structure was erected at the turn of the century – some 47 years ago – after fire had destroyed the frame building. The history of the congregation dates back nearly 100 years. The community has changed much in recent years. A glimpse into the past reveals a picture of 50 years ago that was most enviable. Then there were 40 or more families that gave the church wonderful support. They gathered loyally together for their Sunday service of worship and filled the church. The building committee for the present structure were: John Kelley; Isaac Haney; Thomas Benner; George Roy; Gus. Pound, now of Edmonton, Alberta; Fowler Thomas, now of Detroit; and George Lindsay, of Springfield.

The former four are all dead. A brief survey of the congregation of 50 years ago is interesting.
Caleb Hunt and family who attended well. They lived on a farm a little east and south of the Jenkins’ farm. A house, the only remaining evidence of the homestead, was burnt last fall.

Waite and family of 7 children who seldom missed church service, lived on a farm on the 9th concession now occupied by Arthur Brown.

Thomas Benner, and family of 5 boys – staunch church folk – lived on a farm now part of the T. Jenkins farm. A house, the last remaining evidence of the homestead, was moved away recently.

John Kelley and family who was the church caretaker for years and a loyal attender at services, lived on the farm now occupied by Ralph Dunn.

Fowler Thomas – a member of the building committee, now of Detroit, lived on the present Williams farm.

George Roy and family, whose son Blake, lives in Springfield, lived on a farm on the sideroad, south, on the east side – now a tobacco farm.

John Bowen and family of two lived on a farm across from Gordon Staley’s farm. They were usually at services on Sunday.

John Lindsay and family whose voice was often heard in prayer meetings lived on a farm south and on the east side of the road near the Nesbitt farm. The only evidence of the old farmstead are some apple trees. A daughter – Mrs. F. Sansburn – is still active in Trinity.

Wilson Haney and family of two, likewise, were regular attenders. Mrs. Haney in her 88th year, still lives on the homestead.

George W. Bearss and family of seven were great workers in Sunday School and church. This is now a tobacco farm. The large red brick farm house was built by Mr. Bearss.

Joseph Nesbitt and family of three gave good support to the church. A son, Lorne Nesbitt, lives on the old homestead. The daughters, Mrs. Bert Woodworth and Mrs. M. Simons are still with us.

Samuel Pound and family of six were always at church services. They lived on the farm occupied now by a daughter, Mrs. George Stanfield. Much help was given to the church choir by this family.

Charles Bowen and family lived east on the 8th concession on south side of the road. The farm was recently purchased by Mr. Walsh.

Hiram Laur was Sunday school Superintendent for years. They lived at the end of con. 8, near the gravel pit. Were wonderful church workers.

John Gillett lived on a farm now occupied by Mr. Clark. Mr. and Mrs. Gillett have retired to Aylmer.

Webb Woodsworth, father of Bert Woodsworth, lived on a farm on the 8th con, now a tobacco farm. Mrs. Pearl Millard, a daughter, was church organist.

George Lindsay and family of two sons lived on the farm now owned by Mrs. Sansburn. Mr. and Mrs. Lindsay are now retired, living in Springfield. Their sons, Osmun and Arnold are Springfield farmers.

Edward Zavitz and family of two lived on a farm south on the sideroad now occupied by Mr. Trim. The Zavitz family supported the church well.

Henry Laur and family lived on the farm now occupied by Thomas Jenkins. He built the large red brick house. They were always at church services.

George Disbrowe and family lived on the farm now occupied by Norman Brooks. Later they moved east to the farm recently sold to Mr. O’Brien. It was from this farm that a son , Bert Disbrowe, retired to Aylmer. They were a very loyal church family.

George Thomas [?], son-in-law to James Haney lived on a farm at Glencolin corners. A gaunt cement silo, alone, marks the site of their homestead.

Isaac Haney and family of three daughters lived on the farm across from Willard Brooks. Mr. Haney was a pillar in the church. His father was the first minister in the old frame church. This family is deserving of special mention.

John Porter and family lived on a farm south on the sideroad. The buildings have disappeared. They were also active in Trinity Church. A son – Fred Porter – is living, retired in Springfield.

Samuel Staley, noted for his hospitality and generosity, lived on the farm and built the large farm house now owned by his nephew, Gordon Staley.

John Staley, a brother of Samuel, and father of Gordon, lived where the old sawmill still stands. The farmhouse has gone.

John Chambers and later his son Solon, lived near the church on a farm now occupied by Mr. Knoft.

Samuel Young and family kept the post office at Glencolin corners. Their home was on a lot across from the house now occupied by Wellington Church. An old pump, alone, marks the sight of their homestead. They attended Trinity. Glen Young, the hardware merchant of Springfield, is a grandson.

Wallace Newell and family lived on a farm on the 9th con., now owned by his son Clayton and his mother. This family attended Trinity and were a great help.

Ellison McKenney and family lived on a farm now owned by his daughter, Mrs. Grace Faw. Ellison Jr. is a son. The family attended Trinity.

Herbert Newell and family lived at the east end of the 8th con., on the south side of the road. The Newell family were greatly interested in the church choir. Mr. Newell is retired living in Aylmer.

Edgar Houghton and large family were good church workers. They lived on the 8th con., on the farm recently occupied by the late William Shepherd. This family supported the church to the limit both morally and financially.

Charles Lindsay and family lived on a farm east on the 9th con., on north side of the road. All the farm buildings have disappeared. Mrs. George E. Combs of Springfield is a daughter. They were good church folk.

George Pound lived on his 9th con. farm where his widow Luella Pound still lives. In her younger years Mrs. Pound was church organist both in the old and new church.

Rolls Waite – son of Rodmond Waite – lived on the farm now owned by Charles Anger. This family were members of Trinity and attended well.

Wid Firby recently deceased in Aylmer, lived east of Kilmer school on the 8th con. Mrs. Firby was President of Trinity W. A. for years, and they attended well.

Thomas Firby and family lived east of Kilmer school on north side of the road. Mrs. Firby was a charter member of Trinity W. A. She was a very faithful member of the church and noted for her hospitality.

Ernest Dell and family lived on the farm 2 miles east of Trinity, now owned by Earl Franklin. They now live in Aylmer. And are lovingly remembered for their interest in Trinity Church. These all died in the faith, having served their God and generation as staunch pioneers.

Trinity will be at home to all who remember her with love and affection, and all who wish to attend another anniversary celebration on Sunday, April 27th , 3 p.m., Harry West, George Heipleh, Bert Woodworth, George Stanfield, Mrs. Earl Hayward and Mrs. F. Sansburn, members of the Church Board and on behalf of the congregation bid you a hearty welcome.

26. Block of cement in ground – no stone [probably a plot marker]

68. Fallen in ground; broken and illegible

147. Broken stone; only bottom & base remain
Base only 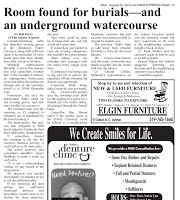