Revised and formatted for the Internet 15 October 2005 by CVH

All rights reserved. No part of this publication may be reproduced, stored in a retrieval system, or transmitted in any form, or by any means – electronic, mechanical, photocopying, microform reproduction, recording, or otherwise – without prior permission of the publisher.

Revised August 2002 by Jim McCallum    Burdick Cemetery is located east of Summers Corners on the south side of Highway #3. The cemetery received its name from the Burdick family, particularly Rev. Caleb Burdick who was a pioneer Methodist minister in Malahide township.

Caleb Burdick was born in 1785 at Lanesboro, Massachusetts. His father James Burdick, a native of Scotland, and his wife Phoebe settled in Vermont where he opened a grist mill and ferry until the War of Independence. He and his family fled to New Brunswick and came to Oxford County in 1790, settling near Ingersoll and opened a grist mill. Meanwhile, his son Caleb Burdick and his wife Lavina had settled near Long Point in Norfolk County and moved to Elgin County in 1819, obtaining a grant for 200 acres in lot 95, Talbot Road East, Malahide township (also referred to as lot 22, concession 6). In 1820 he was ordained as a local deacon in the Methodist church. Rev. Burdick was a circuit rider, making his rounds on horseback to a wide area in Malahide township. Services were held outdoors, in barns, log cabins and schoolhouses. He relied on handouts from the people and what he and his wife and children could produce from his land.
A church was erected in 1822 on a corner of his farm and a cemetery established beside the church. The land for the cemetery was deeded to the Trustees of the Burying Ground by Rev. Burdick on October 3, 1828. Rev. Burdick died in 1858 and is buried in this cemetery along with several family members. In 1865 when a new church was built at Summers Corners, the old church beside the cemetery was torn down.
Another pioneer minister buried in this cemetery is Rev. Reuben Crandall, who was the founder of the Aylmer Baptist church. He died in 1868 at the age of 86. A native of New York state, he came to Canada as a Baptist missionary. He founded a church at Coburg where he remained until 1812. In 1816 he established a church in Aylmer.
Improvements were made to Burdick Cemetery in 1927, including a new fence and gates. The cornerstone of the new fence was laid in memory of Charles Vance Millar (1854 – 1926) and his family.
There have only been a few recent burials in Burdick Cemetery since most area residents are being interred in the Aylmer Cemetery. 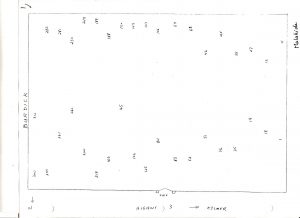 [note: John Ferguson’s will is dated May 3, 1862, and was registered in the Elgin County Land Registry Office on Aug. 6, 1865. Another document made by his son William dated May 1, 1865, describes him as “eldest son of the late John Ferguson”. Although John’s date of death cannot be determined from his broken tombstone, it obviously occurred between May 3, 1862 and May 1,1865]

In / [illegible] / Ester / wife of / Henry SEGAR / who died / Feb. 7, 1852 / aged 56 yrs /
St Thomas Weekly Dispatch, 7 Feb 1855
p. 2 – Suicide – An aged man, of 60 years, resident of Talbot street, in the
Township of Malahide, committed suicide, by hanging himself, in his own barn, on
Monday morning last. His name was Henry SEGAR.
his having thus put an untimely end to his own existence.
He was a man of Industrious and temperate habits, and no cause is assigned for

[This was Violetta (PAINE) (BROWN) (NICHOLS) DUSTEN who died at Malahide. The diary of her grandson, Nicholas Carter Brown indicates that the monument was erected in 1900 by himself and other descendants]

[note: it is possible that this is Mary HANEY, dau of Isaac & Sarah Haney, stone #226.1. The 1851 & 1861 Malahide census show a daughter Mary with them, consistent with the age on the tombstone]

238. White marble, willow
Sacred / to the memory of / Catharine / consort of / Andrew McCAUSLAND / who was born in Bertie N.D. / and after fulfilling / with exemplary piety / the several duties of daughter, wife and mother / and sustaining / for many years an / unblemished Christian character / died in peace August 11, 1848 / aged 45 years /

[While the gs clearly reads that Almira HOY HARPER died Sept 13 1843 it is likely that the gs inscription is in error since the marriage record for Samuel to second wife is given as 10 May 1843. Obviously one of the sources is in error]

262. White marble, weeping willow, broken
In / memory of / Mary / beloved wife of / [buried in cement] / aged 55 y__ / Friends or physicians could not save / This mortal body from the grave / Nor can the grave confine it here / When Christ shall bid it to appear / Thomas Gadsby Sculpture St. Thomas /

[This is possibly Mary wife of Andrew KENNEDY below]

283. White marble stone; only the base and a piece lying flat is left [Jas. ?] McLACHLAN / rest illegible

Thurs., November 29, 1928
The Burdick Cemetery
(The first few paragraphs tell about the cemetery and poor condition that it was in.)
“Then a new day dawned. Away back in the 50’s (1850’s) there lived on the “Street” as Talbot Street was commonly called, Simon Millar and his wife, Sarah Vance. To them in the year 1854, was born a son, Charles Vance Millar. The babe grew to boyhood, attended the local school, and later high school, then finally drifted to Toronto, where he became a prominent barrister.
In the meantime, the parents had passed to the Great Beyond, and the boy, although remembered by his few remaining schoolmates, was practically unknown to the younger generation.
This man, Charles Millar, is an outstanding example of the fact that deep down in the heart of every human being there is an unquenchable love for the place of one’s birth and no matter what life may have brought, an overwhelming desire to be laid to rest with the loved ones gone before. When Charles Millar passed away, his Will revealed the fact that he not only desired to be brought to the old home cemetery for burial, but that he had bequeathed a handsome legacy for the improvement of the grounds. It just needed this human touch on the part of an old and almost forgotten son of the district, to arouse the enthusiasm of his few remaining peers and their descendants and they set to work with a will.
Through the courtesy of Mr. George Harp, the writer had the pleasure of viewing these improvements a few days ago. As the car stopped before the magnificent new gate it was the most unbelievable that this was the same place where but a few years ago we had vainly tried to find a headstone, in order to verify a date for a business transaction. The handsome iron gate hangs from large rug (sic) brick pillars, capped with stone, surmounted by stone spheres. A granite tablet in the east pillar bears the inscription;
In Memoriam
CHARLES V. MILLAR
1854 – 1926
and the west one bears a similar tablet with the words
BURDICK CEMETERY
Improved 1927
Before leaving, Mr. Harp, conducted us to the Millar plot, which is situated in the south-east part of the little cemetery. The brown granite monument which marks the last remaining place of Charles Vance Millar, may be described as substantial and stately, rather than elaborate, and this same idea has been cried out by those in charge of the improvements.

Before starting on the return journey, we looked back over this little city of the dead, which once formed part of the old Burdick homestead, and the thought came to us: it is not the brown shaft that is the real monument to Charles Millar. Travelers might pass day after day without seeing it. but no one can fail to notice the cemetery as a whole, which, even in its unfinished condition is an outstanding feature of the landscape, and who knows? Perhaps this was his method of showing his old neighbors, that although he had been separated from them so long, he was still one of them and that the old home and its surroundings were dearer than all else on earth.”