Gravestone Inscriptions and Burials without Monuments

Revised and formatted for the Internet 20 August 2017 by Bruce C. Johnson Jr.

Copyright by the Ontario Genealogical Society, Elgin County Branch 1982 – 2002. All rights reserved. No part of this publication may be reproduced, stored in a retrieval system, or transmitted in any form, or by any means – electronic, mechanical, photocopying, microform reproduction, recording, or otherwise – without prior permission of the publisher.

Berean Baptist Cemetery is the resting place of many Nova Scotia Street Pioneers.

It is located in Malahide Township about 5 ½ miles west of Port Burwell, turn north at the first side road west of Lakeview Church, or at the old Lakeview School (Carter Road) and one mile north.

In 1862 a controversy arose over the election of new deacons for the Jubilee Church. As a result, John Haggan and 15 supporters withdrew from the church and formed the “Berean Church”. After meeting in the local Temperance Hall for several years, in 1870 John Haggan and Elisha McConnell were engaged to build a church for the sum of $900. It was to be 45 feet by 32 feet with 21 foot posts; and to be enclosed, plastered and seated. At one point in the 1880’s it had 100 members. In 1894 the building closed and moved to Aylmer. Its members went back to the Jubilee or Lakeview church as it was later called. 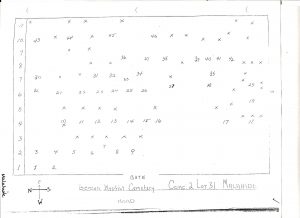 7. White marble stone laying on ground; broken in two pieces –
In / memory of / Eva / [broken] / wife of Wm. PUNTINE / died Nov. 5, 1870 / 79 years / I have fought a good fight I have finished my cause / I have kept the faith henceforth there is laid up for me in heaven / a crown of righteousness which the Lord the rig-/ hteous judge shall give me at that day /

19. The top of the stone has a pair of hand embossed; the stone is sunk in the ground but there is nothing more to this stone